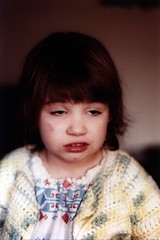 Wow.  These past few weeks have been rough!

Today is no exception.  I planned on getting quite a few things done today, but shortly after I got to work, I started feeling really nauseated.  Like, really really.  So, I took some Zofran for that (once I remembered that I had some).

Unfortunately, this didn’t help.  Actually, I started feeling much worse.  I was getting very dizzy and lightheaded and I began to really think that I was going to pass out.  Which, being at work, is probably not the best thing to happen.  It was only 2 pm or so, and I was scheduled to work until 10 pm.

At about 3 pm, with two of my co-workers scheduled to leave in about an hour (leaving me and one other person), I figured that I needed a contingency plan.  I hated doing this, mostly because I hate letting people down, but I contacted my manager and let him know that I was not well, and we made arrangements for a co-worker to finish my shift (and possibly for another to come in early).

I can’t even describe how bad I felt.  I guess at least I wasn’t super exhausted, as I have been recently.  I asked for prayers and hoped that I wouldn’t actually pass out, because I’d hate to have to go to the ER twice in two weeks — that’s just ridiculous.

Finally, about 4:30 pm, it started to let up some, and the lightheadedness started to recede.  The nausea is still present, but I can work around that.  I asked my co-worker to stay a half-hour, to make sure I’d be okay, and when I was fairly stable at 5 pm, I let him know that it was okay for him to go home.

Have I mentioned how much I dislike this?  I feel like I’m becoming a liability.  So frustrating.  And I didn’t finish anything that I wanted to work on today.  *sigh*  I guess I have to learn patience with myself.