Someone in one of my planner groups was showing how she incorporates some scrapbooking into her planner, and mentioned a project that she was doing through Ali Edwards‘ blog called December Daily.  I checked out the site, and while I haven’t been into scrapbooking so much in a number of years (it takes a LOT of time and dedication), I thought that the idea of recording how I spend these Advent days leading up to Christmas to be an intriguing one.  So, I’m going to attempt to do that here.

I had so many ideas for what my main picture was going to be for the day.  I was initially thinking that it would be a photo of an exam room, as I had an appointment with my Neurologist today (and a half day at work!).  However, the doctor takes you back to the exam room and I felt a little weird asking him if I could take a photo.

Then, I thought – maybe I can take a photo of the library?  After all, I have to *renew* my library card, so it’s a little more than just a normal visit.  And I do intend on spending less time binge watching Netflix and more time reading books this season.

But, ultimately, I picked something a little more … cozy. 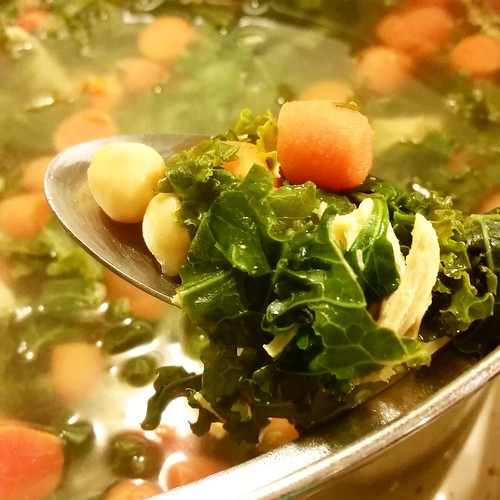 I love soup and I had some veggies to use up.  I like how it doesn’t take a ton of time and effort, and then I can put it in some plastic containers and have dinner ready for almost an entire week.

In this soup, I baked a chicken breast and shredded it, adding it to some chicken stock, then chopped up some fingerling carrots, ripped up a bunch of kale, and added a can of chick peas.  I decided against putting some kind of noodle or rice in.  I suppose I can always add that later, but I probably don’t need the extra carbs anyway.

This is my “Day One” for my December Daily project.  Something a little warm and cozy that I enjoy a bit more in the winter months.  Soup and reading a book at the dinner table.  🙂

How are you spending your December?