After last Sunday’s homerun with the Peanut Chicken Curry, I was looking forward to making my next meal from Plated. The opportunity came up last night, and I made the Quinoa Grits with Squash. Here’s their reference picture. Sorry that I don’t have as many pictures as I did for the other dish, but my camera was at work and my phone battery had died. And I was too hungry to wait for it to charge so I could take pictures as I went. 🙂 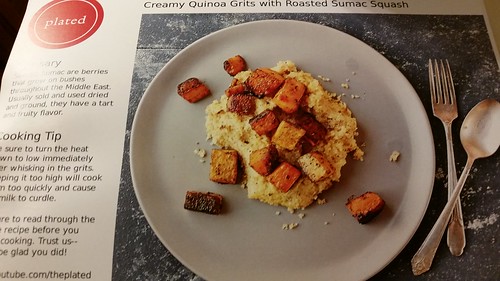 The recipe is slated to take 25-35 minutes to make, and it took me 30 minutes. So, again, they were spot-on as far as cook times go. The only thing I would do differently with this recipe would be to either reduce the temperature of the oven or the bake time for the squash. And probably try to stir them around a bit halfway through. My squash got a little burnt on the bottom.

I also ended up cooking the quinoa a little longer than what they had specified, as it was supposed to be cooked until “tender” and never seemed to get to that point. But I got it to be acceptably cooked and went on from there.

I’m not really a big fan of grits. But I’m willing to give it a try. As soon as I was done, I put half of the meal in a container to take to work today for lunch. Which worked out perfectly, since it’s a vegetarian dish and today’s (No Meat) Friday! 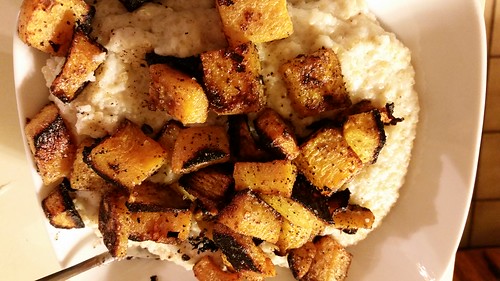 This is how mine turned out. Not too bad. And taste for this one? It was okay. It was slightly on the bland side. Were I to make it again, I would add a little more cheese and seasoning to the grits, and perhaps more sumac on the squash, as that flavor didn’t stand out as much as I thought it would.

Lunch today, even reheated, was also good. And both meals were filling.

Sunset near Lake Jackson!
Driving home!
Sun and fog this morning!
Birds we are currently hearing from our patio! (We use the Merlin Bird ID app)
Fall colors road trip!
Pot roast at Mom & Dad’s!